Ten most read topics in the news.    Comments on How to make America great again.

Jennifer Heinl – the wife of Michael Heinl who is a police detective in Pennsylvania was photographed with another man holding her during the January 6 Capitol riot. The man presumably Jennifer’s lover boy has been identified as Kenneth Grayson. 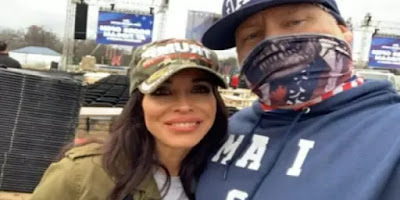 Jennifer told the FBI that she did not enter the Capitol, but she admitted that she traveled to Washington on January 5 and returned the next day. It is not clear what she told her husband she was going to do in Washington, DC.

According to the FBI, the Facebook Messenger exchanges between Jennifer and Greyson shows that the duo planned to travel to Washington, DC, where they also planned to rent a vehicle and a hotel.
Although Jennifer insisted that she did not sleep in the same hotel with Grayson, but the whole issue was too much for her husband to bear and he decided to file for divorce.